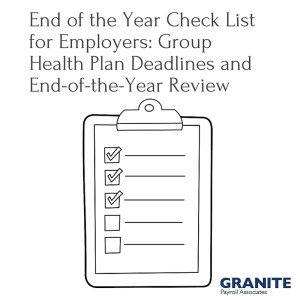 This is a busy time of year for businesses that have employer-sponsored group plans. There are many deadlines that are looming before the end of the year and into 2016. As a business, you’ll want to make sure that you file everything that is required on time. Here is a handy, non-exhaustive timeline of upcoming deadlines to help keep you on track:

Employers who sponsor health plans that include prescription drug benefits for active employees or retirees who are Medicare-eligible must provide an annual notice that explains whether their drug benefit is “creditable coverage,” meaning that it is expected to cover, on average, as much as the standard Medicare Part D prescription drug plan. The only employers exempt from this requirement are those that establish their own Part D plan or contract with a Part D plan.

This is the yearly period when people can enroll in a health insurance plan. For 2016 coverage, the Open Enrollment Period is November 1, 2015 – January 31, 2016. People may qualify for Special Enrollment Periods allowing them to enroll outside of Open Enrollment if they have certain life events, like getting married, having a baby, or losing other coverage.

The deadline for exempt organizations (Voluntary Employee Beneficiary Associations or “VEBAs”) to submit the IRS Form 990, Return of Organization Exempt from Income Tax, is November 15, 2015.

This deadline applies to organizations following a calendar tax year and who previously filed IRS Form 8868, Application for an Extension of Time to File an Exempt Organization Return.

Individuals must be enrolled in Marketplace/Exchange coverage for it to be effective January 1, 2016.

ERISA plan sponsors who received MLR rebates on September 30 must pay the appropriate rebate amount to participants or for benefit improvements if the rebate is in part “plan assets,” or employer must establish a trust to hold the rebate as plan assets.

The first ACA employer responsibility information returns are not due to individuals until January 31, 2016, and to the IRS by February 28 (March 31 if filed electronically), however, employers must track and collect 2014 and 2015 data that will be used for those submissions. Employers are required to include the social security numbers of employees, spouses, and covered dependents. Social security numbers are preferred, but if a social security number is not available, you may use an employee’s date of birth instead. Congress has increased the penalties for failing to comply with these new reporting requirements. Failing to furnish the required form, on time can result in penalties up to $250 per failure (previously $100), subject to a calendar year maximum of $3,000,000 (previously ($1,500,000).

Wellness Program Review: The Equal Employment Opportunity Commission (EEOC) has been actively taking legal action against employers over wellness programs that it considers coercive under the Americans with Disabilities Act (ADA). While the EEOC rules are not final, employers sponsoring wellness programs should evaluate their existing wellness program to ensure the highest return on investment.

Cost-Sharing and High Deductible Review: Plan sponsors should carefully evaluate their out-of-pocket limits to ensure that plans comply with both Health Care Reform limits and, if the plan is intended to work with Health Savings Accounts, with High Deductible Health Plan (HDHP) limits.

Opt-out Payment Review: Employers should review the impact of the guidance, stating that “cash-in-lieu” or “opt-out” payments in a group health plan may have to be taken into account when calculating affordability under ACA, on their existing opt-out payments and potential penalties.

Granite Online is a powerful web-based payroll solution designed to streamline payroll operations while enhancing flexibility, security, and control. This dynamic product enables you to maintain control of your payroll data while utilizing our payroll expertise. With 24/7 convenience, Granite Online allows instantaneous e-transfers, printing of live checks and payroll reports, and tracking of human resource data. This easy-to-use payroll product lets you know what’s happening in real-time, so you can minimize costly productivity issues. Whether your company is large or small, local or nationwide, our payroll specialists are at your service.